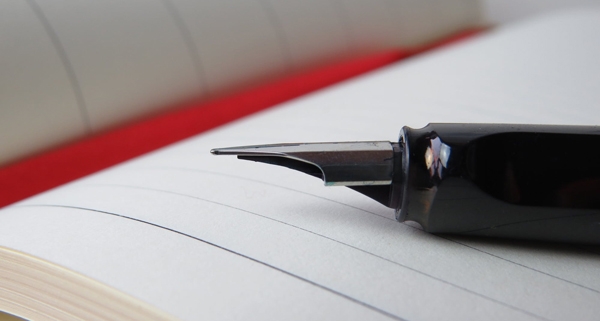 That was the day we landed for the first time in which would be our new home – Canada.

In 1996, there was no social media. The Internet was just a couple years old. Most people’s email accounts were less than a year old.

It was difficult to be separated from my friends. But being in a new country was exciting, and there was so much I wanted to share with my friends back in Spain.

I couldn’t post pictures online, send status updates or Whatsapp messages. There was no Facebook, Instagram, or Twitter.
So I wrote… by hand… a lot. I wrote so many letters, hundreds of them… until my hand hurt.
My snail letters were epic between 10 and 20 pages long, written both sides.

Letters took between 7 to 14 days to cross the Atlantic and arrive in Spain.
Here is the first page of a very long letter I wrote back in 1997 to a friend.

I recently read an interesting story on the internet, written by a Spanish man called Miguel. It certainly left me thinking about his observations as I found it was quite shockingly revealing about the times in which we now live.

In today’s hyper connectivity and communication, anything written an hour before becomes old news!
Yet if one thinks back to the ‘old, old, normal, ’ many people would file and keep a hand written letter, the effort of writing it, and it’s content, sending it, gave it a value that is in today’s ‘NORMAL’ most unusual. In today’s world this letter would most likely be discarded.
He deduces that the easier it has become to communicate with each other, the less valuable those communications have become, and so handwritten mail is quickly becoming undervalued and almost becoming extinct!

Miguel adds “We’ve gained speed and convenience in communication, but we’ve lost depth and meaning.” He goes on to say “The value we assign to any given item is proportional to the amount of effort it takes us to create it or obtain it.” I found myself agreeing with this statement!
He goes on to say. “The magic of technology has killed the magic of old fashion slow and deliberate communication. We say more, but it means less.” This is quite a statement to make and an indictment of our today’s world!

He ended by deducing that “overall, social media hasn’t killed his relationships, but it has been detrimental to those intangibles that make life so much more interesting.”

That got me thinking that in certain circumstance, CHANGE may not altogether be better for our way of being, especially since there is a paradox here. The forced experience of Lock down has been a bit of a shock to most, but in hindsight not all bad. Paradoxically we have all had to slow down our pace of life prior to Covid 19 which had been one big rush, and a very fast pace of life. However, digital intercommunication has been the only means of keeping in touch with family and friends.

So my vote during these interesting and challenging times is actually that no matter how one does it, the majority of humans would appear to have the psyche of wanting and needing most forms of COMMUNICATION, because COMMUNICATION DOES MATTER!

Yet, those letters I sent, and the ones I received were extremely meaningful to my friends and me.
The easier it has become to communicate with each other, the less valuable those communications have become.

The value we assign to any given item is proportional to the amount of effort it takes us to create it or obtain it.

It’s unlikely I will ever send or receive a long hand-written letter like that ever again. Those days are gone.

We say more, but it means less.

So overall, social media hasn’t killed my relationships, but it has been detrimental to those intangibles that make life so much more interesting.

At least, I do have a past where I got to experience moments full of emotion and true excitement when opening a hand-written letter from a friend 3000 miles away.

But, what about the new generations? Will they ever get to experience that level of connection with any of their friends?

Peace, Love, and hand-written (on a computer) cookies.
Miguel @ Grumo.com
P.S: Algorithmic thoughts – Another week has passed without feeding the ever-hungry Youtube soul-eating algorithm. My algorithmic clout has decreased by 2.1% but I’ve replenished my soul 1.7%. Is this worth it?

The power of Meaningful Communication

Point To Ponder
Scroll to top

Because these cookies are strictly necessary to deliver the website, refuseing them will have impact how our site functions. You always can block or delete cookies by changing your browser settings and force blocking all cookies on this website. But this will always prompt you to accept/refuse cookies when revisiting our site.

We fully respect if you want to refuse cookies but to avoid asking you again and again kindly allow us to store a cookie for that. You are free to opt out any time or opt in for other cookies to get a better experience. If you refuse cookies we will remove all set cookies in our domain.

We provide you with a list of stored cookies on your computer in our domain so you can check what we stored. Due to security reasons we are not able to show or modify cookies from other domains. You can check these in your browser security settings.

If you do not want that we track your visit to our site you can disable tracking in your browser here:

We also use different external services like Google Webfonts, Google Maps, and external Video providers. Since these providers may collect personal data like your IP address we allow you to block them here. Please be aware that this might heavily reduce the functionality and appearance of our site. Changes will take effect once you reload the page.

The following cookies are also needed - You can choose if you want to allow them: